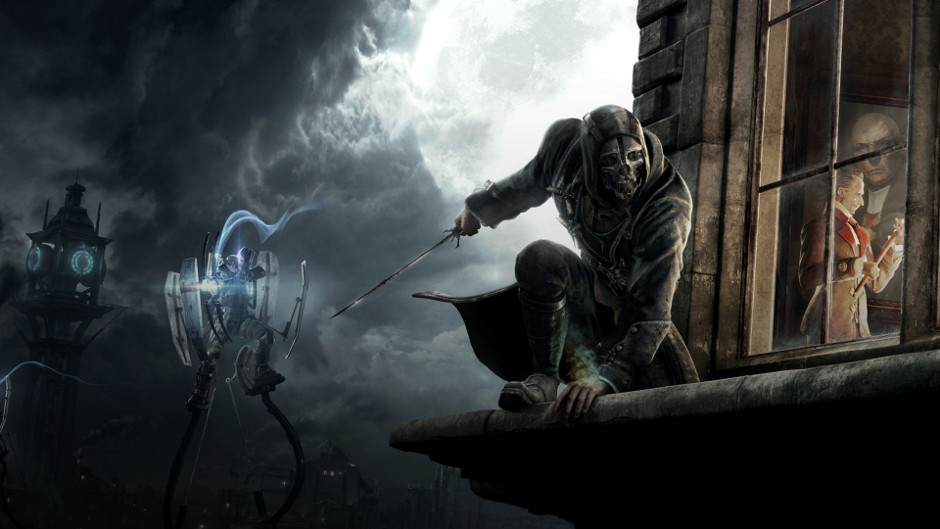 Dishonored is a first person stealth action game by Arkane Studios. Â I reserved it from Game Access so that I had it only two days after it was released on PS3. Â I was completely unaware of this game until about 5 months ago when it started getting a lot of press coverage. Â In a way that was great, instead of having 3 years of hype it just comes virtually out of nowhere and is available to play shortly thereafter. Â There is some replayability and lots of achievements to unlock if you want to run through the game a second time. Â Your choices do make an impact on the world and there are three different endings, that said I sent it back as soon as I had finished it, not because it wasn’t good, but because there are so many other things to play.

In Dishonored you play Corvo, the Royal Protector of the Empress who has been away at sea trying to find a cure for the plague that has been spreading across the empire. Â Upon returning home the empress is assassinated, her little girl is kidnapped and Corvo is framed for the whole thing. Â It is quickly explained that you were set up by the government officials and aristocracy in order to seize power from the empress. Â After being locked away for several months in the prison awaiting your public execution while they torture Corvo daily in order to force a confession, you are given a note from some people who feel you were set up and smuggle in a key to your cell. Â After escaping from the prison you meet up with a group of people who want to stop the new Lord Regent who framed you, save the empress’ daughter, and put her on the throne.

After a good night’s sleep in a real bed you awake in a strange realm and meet a mystical man known as the Outsider. Â He puts a mark on Corvo’s hand which allows him to use special Outsider powers (which can be upgraded throughout the game via collectible runes). Â You are then sent back to your own room and you get to meet a master engineer who will create amazing weapons and upgrades for you (upgraded throughout the game via money and blueprints found on levels). 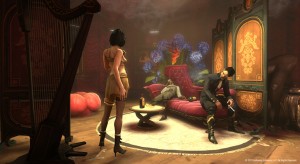 You are then set upon a series of missions where you must assassinate key members of the ruling party to find information about where the daughter is being held, rescue her, clear your name, and a few other twists which I won’t spoil here. Â Each mission allows a good amount of player choice, including full stealth, full combat, or a combination of the two. Â It is explained in a loading screen early on that the more you kill, the greater amount of chaos will exist in the game, which will make more plague rats, more sick citizens who will attempt to kill you, and more guards. Â It will also affect the ending, but that isn’t a great reason to play the entire game in one way or another. Â Since I’m a great fan of stealth games I chose the stealthiest of routes, the lowest chaos, which meant in most missions I chose the non-lethal way of disposing of my assassination target, most of which are quite interesting. Â For instance one target can be killed straight out, or you can knock him out and put a mark on his forehead that will label him as a heretic and he will be excommunicated. Â There is a third option that I opted for: Â since he had put poison in a glass that he intended to use to kill a noble officer who is one of the last uncorrupted men in the empire, I switched the glasses so that he poisoned himself. Â This was one of the only assassinations I did in the entire game.

Another mission was to kill two brothers who were funding the Lord Regent, instead I made a pact with a gang leader who agreed to snatch them, shave their heads, cut out their tongues and put them to work in their own slave mines. Â Throughout the entire game I maybe only killed 7 people, most of whom were during the prison escape before I understood the stealth and didn’t have the Outsider powers. Â For me the option to perform the entire game in stealth was something I was lacking while trying to get through Deus Ex: Human Revolution, so it was a welcome challenge. Â A nice feature is that you can stealth around and if you get caught you just kill that person and if he didn’t trigger an alarm you can go back to being stealthy. Â You will likely keep the low chaos rating, you will only lose the achievement for not killing anyone or not being a ghost. Â I particularly liked the idea of being a ghost and would often think to myself that these guards must be shitting their pants because the other guards just disappear one by one and they don’t know what to do.

One of the great things about this game was the setting, the world is unlike any other in that it’s a bit like 1890s England, but with a steam punk setting only instead of steam the main power source is whale oil, so there is a whole back story told through books you find of the whaling ships and how these giant beasts are captured and processed. Â The game has a really interesting art style as well, which is shown so perfectly during a masquerade ball. Â Screenshots end up looking like concept art to me, which I love.

Because the setting was so new, anything is possible which makes it truly surprising the different things that come up and it all makes sense in that world. Â If there is one complaint I have is that the “Dark Vision” power (which is akin to the Detective Vision in Batman Arkham Asylum/City) is so useful that I probably missed out on a lot of the beauty in the art, except at the masquerade ball where I couldn’t use my powers or I would be swarmed by guards.

The powers were also fun and interesting, Blink makes first person platforming easy and consistent, Possession is great for sneaking past a guard station or walking a guard into a back alley to take him out, Bend Time gives you so many other options such as picking arrows out of the air or taking out 5 guards at the same time. Â I really enjoyed this game and look forward to any sequels they will inevitably be asked to make, even though it’s not really a spoiler to say that the story wrapped everything up such that a sequel will be hard to write.

Cons: I felt that the game was pushing me to be more stealthy from the beginning, this isn’t a problem for me, but for someone who ends up doing a high chaos run, I think they may not enjoy it as much.