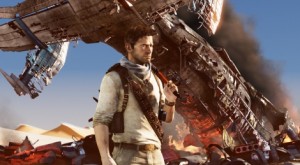 I seem to recall liking both Uncharted and Uncharted 2, but after about 45 minutes with Uncharted 3 I was thinking it couldn’t be true.

I think Uncharted 3 suffers a little (or a lot) from following Batman: Arkham City and really cannot hold up to it in many ways.Â  It’s not really a terrible game, it just has some issues that seem archaic after playing Batman.

Let me say that I did play it all the way through without getting so frustrated that I put it down.Â  When I played it, I played until I was tired enough to sleep.Â  Unlike other recent games (for another way of saying Batman), I passed up playing it for several days at a time.Â  I would play it for a few hours until I went to bed, then not play it for a few days and not really have a desire to play it until I basically forced myself into it at which point I would play until bedtime again.

The story just isn’t that gripping and it doesn’t really feel necessary.Â  If I remember correctly most of Uncharted 2 was based on one bad decision that results in your friend being taken, and you have to rescue them.Â  This leads to a lot of other things eventually but there is at least an impetus to take on the next challenge.Â  Almost the entire game of Uncharted 3 is based on Nathan Drake being obsessed by greed or fame or something else into doing things you can’t imagine any normal person doing.

For example, does it make sense that someone would take on a quest to retrieve some trinket that requires them to kill at least 100 people.Â  It shouldn’t really matter that these are all considered bad people, they are really just hired security workers.Â  What makes it worse is that they have a minor league stealth mechanic, and Drake even says to himself sometimes when entering a new area “I should try to avoid fighting these guys directly”.Â  At most I was only ever able to take out two guys stealthily before someone found a body or saw me.Â  In a lot of cases you would not actually be able to progress if you didn’t allow a guard to set an alarm because in order to progress you must have more guards break a door in which you later leave through.Â  This is one of the major ways I wish Uncharted 3 was more like Batman.

The other aspect that pales in comparison is the fighting system.Â  The system has QTE block/evade type moves, but they are slow and clunky and often fail when you want them to work.Â  This was a huge let down.

The final aspect that truly bugged me about Uncharted 3 is the “run for your life” (for lack of a better term) segments.Â  There is one near the beginning where you are running away from thugs and in several places it looks like you have a few choices but really there is only one that doesn’t cause you to be captured and have to restart the section again.Â  I believe I restarted that section at least 12 times.Â  There are at least 3 sections where this happens, and after a few restarts you lose any sense of anxiety and just run in whichever direction you want and make changes when you restart.

The animations are fantastic, I’ve never seen such smooth transitions in another game, and the voice acting is great.Â  I may have enjoyed this game a lot more if I didn’t play Batman the week before, but I think they just rushed it out too quickly.