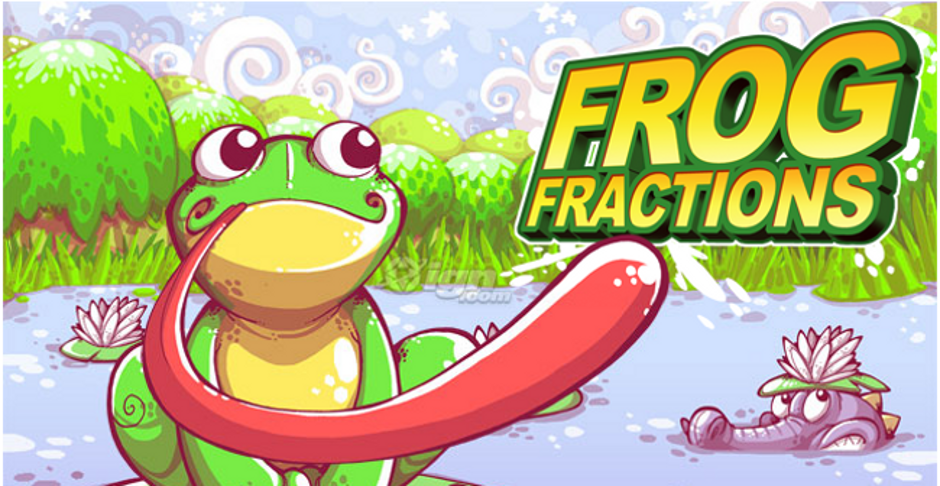 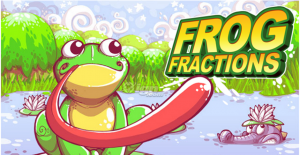 Frog Fractions is a web browser game developed by Twinbeard Studios and is described as a spoof of “edu-tainment” games. Â It is free to play at the website and should be played at least long enough to buy a few of the upgrades to realize the potential, by then you should be hooked and could potentially finish the game in one sitting.

The game begins with the player controlling a frog on aÂ lilypad and protecting fruit from bugs that are swarming from the top of the screen. Â You control the frogs tongue sort of like old Missile Command. Â Each bug you eat gives you a number of points in fractional form which is partially where the game gets it’s name. Â Collecting the fruit as it drops into the water will also net you some points. Â After each round you will get an upgrade screen, and depending on your skills you may or may not need to play a few more times to afford some of the cheaper upgrades. Â Some of the rounds require you to type the words that come with the bugs in order to defeat the bugs, sort of an homage to Typing of the Dead. Â Continue to play upgrading your tongue and cybernetic brain until you can afford the Turtle, then the fun really begins, and I’ll spoil the game after the break.

After you have the turtle you can move in almost any direction, at first you may think (as I did) that this proves no great advantage. Â When you realize that all that fruit you have been missing is just under the water, and you are a frog on a turtle, you can move towards the bottom of the screen which will then swap to the underwater area with a large pile of fruit just waiting to be picked up. Â So much fruit in fact that your score will jump to “like a billion”, which will help with your next few upgrades. Â Upgrading to the dragon and adding a warp drive will allow you to progress into the next section which has you catching bugs while travelling through an asteroid field. Â Eventually you will end up on Bug Mars where you must fight a robot squid.

Upon defeating the squid you will be taken to bug court where the game shifts more to the adventure titles like Monkey Island for styling. Â This “fractioning” of the game play is where I think the true meaning of this title comes from. Â Assuming you answer the questions of the court satisfactorily you will be freed with your dragon to work in the mines underwater. Â Oddly (because it hasn’t been odd enough so far) while you are travelling through the network of caves there is a narration of the fictitious origin of the sport of Boxing which is quiteÂ humorous. Â Eventually you will find a space ship that you can enter.

At this point the game switches styles again into a text-based adventure game which requires some thought to get through in order to get the ship back on track to bug mars. Â After you have redirected the space ship you will go on to a promising career in Bug Mars politics where you eventually take the highest office in the land. Â That is basically the end of the game.

Cons: Very easy to not realize there is more to the game at the very beginning