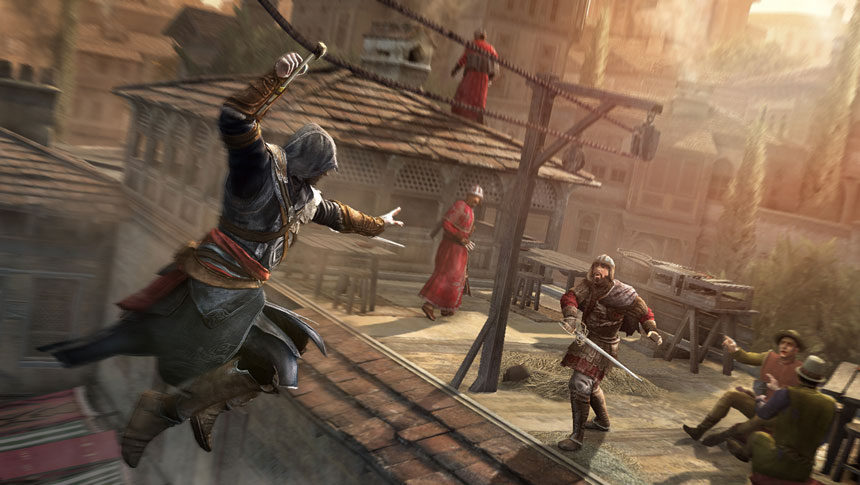 After 4 months I finally got around to finishing Assassin’s Creed Revelations. Â I had played it a lot when it came out, but then SWTOR released and then I went on vacation and it just kept getting overlooked, but as soon as I started to play it again I couldn’t put it down until I’d finished it (or had to sleep/work). Â It’s very compelling, and usually does a good job of making you want to complete the next story mission. There are a few pauses in the story where it makes sense to run around and complete all the side missions and buy up all of Constantinople.

Not to spoil Assassin’s Creed Brotherhood, but at the end of that game you are in a coma, so Revelations starts with you stuck in the Animus (apparently that can keep you alive somehow) and so the interface is a lot more glitchy, there are times when it runs through commands like a shell script, and you end up on some test island. Â This is all part of the aesthetic and sets up the premise that you must unfragment the Animus’ memory in order to free yourself. Â For that reason you never see all the people you became so familiar with in Desmond’s world in Assassin’s Creed 2 or Revelations until the end, and this cliff hanger ending is just as gripping as Revelations.

Revelations is essentially the same gameplay as Brotherhood, with a few minor additions. Â This is fine because the gameplay is pretty solid, so it’s mostly about adding in features like the new bomb crafting mechanic and the hook blade. Â They have also fleshed out the Assassin resource management mini-game from Brotherhood by allowing you to send recruited assassins to stay in different Mediterranean cities and run missions. Â This minor change (which I didn’t understand for a few hours after getting into it) meant that I could recruit around 60+ assassins and have most or all of them running missions all the time. Â Only once did I miscalculate my odds and send 3 people on a mission with only 85% success rate and they all died.

One major addition they added in this game was the assassin tower defence mini-game, where the templars are attacking one of your assassin hideouts and you must position leaders, crossbowman, rifleman, barricades, etc. in order to stop their advance so they don’t take over the tower. Â Unfortunately I was not very good at this mini-game and found it very frustrating. Â Luckily you can upgrade your assassins so that they no longer get attacked, and if you fail at defending your tower you only have to seek out the templar captain, kill him and light the signal fire to reclaim the tower. Â Being a completionist, to a degree, I wanted to get a bonus for defending my tower three times, I was only able to do it twice after trying at least 10 times, so I gave up. Â Turns out that if you upgrade all your assassins (which would remove the ability to defend, since they are no longer attacked) you get the bonus as if you had done it. Â I wish I’d known that up front, I would have only done the tower defence the one time that it is part of the story.

The other major addition is in the Desmond sequences which unlock if you collect enough Animus fragments scattered around the world. Â It created a completely different mode which is a first person puzzle mini-game which I really enjoyed, you can create blocks that hover in mid air and you can walk on them but there are certain traps in the world that destroy them or make them move. Â I really liked these parts, unfortunately there are only 5 of them, but the puzzle solving aspect was pretty fun.

I am really enjoying the story of the Assassin’s Creed series and this one was a great end to the Ezio trilogy. Â I can hardly wait for Assassin’s Creed 3 in the fall. Â I loved that they included more Desmond back story, although some of it seemed like retcon because in Assassin’s Creed Desmond acts like he had no idea what assassins were and it is sort of explained that the Animus is responsible forÂ transferringÂ some of his fighting skill that you have at the end of the game. Â It’s hinted that he is gaining the abilities of his ancestors, but in this game they explain that he ran away from the assassin order when he was in his late teens and lived as a bartender for 10 years, then when he was picked up by Abstergo he just pretended not to know anything, and all his training failed him. Â Regardless it is a much better story this way so I can’t fault them for changing it a bit.

Revelations lets you play several sequences as Ezio reliving the life of Altair from the first Assassin’s Creed game, including playing Altair as an 80 year old man who doesn’t move very well, but can still hold his own in a fight.

The more I play other games, the more I feel I was unjustly harsh in my review of Uncharted 3. Â It did have a genuinely compelling story and the fighting mechanic wasn’t the worst ever, and the repetitive “run this way, not that way” mechanic is not unique to the Uncharted series. Â While I did notice a similar mechanic at work in some missions in Revelations for the most part you “can” continue on even after making a tactical mistake. Â The main difference will be that you don’t get 100% synchronization in that memory block, and later you can choose to redo that section. Â When I finished the game there were several parts that I didn’t have 100% on, and some of them I went back to complete, but it’s really strange to even start doing something like that when there is nothing at stake anymore.

I didn’t do most of the Peri Reis side missions until I’d beaten the game, and I wish they would have somewhat forced me to do them, since after doing them I learned a lot about the bomb system that could have come in handy during the actual game. Â On the other hand I spent so much time in theÂ Mediterranean assassin side missions that before I finished the game I had the entire region until my control and each city was maxed out on assassins and percent. Â That actually made me care a little less about it, except when I went into the underground area and it would politely inform me that the templars were attacking a city but there was no way for me to communicate that they should fight back. Â When you control all theÂ Mediterranean cities and own everything in Constantinople money becomes no object and I bought every single book and weapon I could find even though I had no use for them. Â I still finished the game with 400,000Â Â Â akÃ§e.

This is one of the few games that I actually tried theÂ multi-player, since it claims to be so much different because instead of just running around shooting people in the face, your goal is to stealthily walk up to your target and stab them in the back while avoiding another player who is trying to do the same to you. Â Unfortunately I tried playing it early on a Saturday morning and I think that might have limited my potential matches, and I was put into matches with level 49s while I was still only level one. Â Needless to say I got stabbed a lot because I didn’t really understand the mechanic and everyone else had unlocked certain cheats. Â I gave it 3 hours, and I’d like to try it again when I could possibly play with people my own rank, because there is apparently story elements about the Templars that are unlocked from playingÂ multi-player.

If it’s unclear from what I’ve said up till this point, I really liked this game and can’t wait for the next one. Â I think this series is worth playing for anyone that can get past the awkwardness of the first game.