Tomb Raider, released in March 2013, is an Action Adventure Platform game developed by Crystal Dynamics and is a reboot/origin story of the legendary English archaeologist Lara Croft. Â I rented the PS3 version from Game Access, though I hear the PC version has substantially better graphics, the PS3 version wasn’t bad at all.

The story follows a young Lara Croft as she goes out on her first expedition as the junior archaeologist to the famous Dr. Whitman, who is funding the expedition to find the Yamatai, the Japanese kingdom where the Sun Queen Himiko was laid to rest. Â During the opening sequence Lara suggests looking in an area called the “Dragon’s Triangle” which is known to be rough water and responsible for many wrecked ships. Â The ship runs into a great storm and tears in half, and during a fantastic sequence to attempt to escape, Lara falls into the water and is washed up on shore. Â This is where the game begins for the player, and the first task is to find the rest of the crew.

While exploring the island to find the crew, Lara comes across many hazards including indigenous animals and people, traps, and debris from crashed ships and planes. Â Lara must fight to find and save the crew from the local tribes and find a way to escape the island.

A very bold choice was to make Lara much more human than any previous game or movie, she starts off little more than a girl, freshly college graduated, and follows her through the tough choices she has to make, such as killing an animal for food and ultimately killing an attacker. Â She deals with this much like a normal person would, and there is a lot of emotion in the first half of the game. Â Over time she learns that the island is kill or be killed, so she comes to grips with all the killing she has to do.

TheÂ plat-formingÂ and puzzle solving were great, and pretty much what I’ve come to expect from these types of games, starting with the original Tomb Raider games and the Uncharted games that followed. Â There were very few times when I didn’t know where I should go or what I should do next, which kept the game moving smoothly. Â There were several times when I’d miss a quick time event and Lara would die some horrible death, but the restarts were quick and without a lot of repetition.

Combat was fairly easy to grasp, ranged was typical and very fun, melee was a little different and took some getting used to. Â They didn’t feel the need to add in “boss” battles that suddenly relied on combat skills I hadn’t already worked on. Â Most aggressive the game got was sending waves of enemies at me, this was difficult at times, but there was usually some way to make it through, and it seemed to track how many I’d killed so I wasn’t dying too many times before I’d clear out all the bad guys. 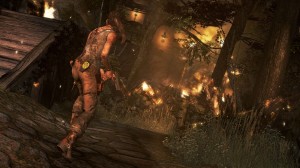 Animations and voice acting were extraordinary, some of the best I’ve seen. Â Lara moves the way a person should, when she is injured she favours that part how you would expect and when she falls from a great distance she hits the ground hard. Â I should mention that another great part of this game is that they don’t shy away from actually injuring Lara. Â She starts the game with a piece ofÂ re-barÂ in her side, and throughout the game she gets muddied, bloodied, dusted, and cut up. Â It helps to make her ordeal that much more significant because she is taking all this damage but continuing on where others might stop.

Extrinsic challenges are pretty good, each area has a map of the local collectibles that can be found, and there are some challenges that don’t appear on any map in each area. Â These don’t affect the game other than allowing you to upgrade weapons and gain XP for adding skills. Â Which reminds me that there are some light RPG elements in the game, which is pretty much commonplace in games now. Â They work really well and add another layer without really taking anything away.

The only real complaint I have is a design choice to make the camera have a lens. Â It is common for the game camera to produce lens flare when looking at lights of the sun, but this camera also had lensing effects when it got wet which was really distracting. Â Walking near a waterfall, which happens fairly regularly, just brings your attention to this sheet of glass like there was an actual camera person following Lara around the island. Â Otherwise it’s a fun and compelling game that I found very hard to not want to play every night since I had it. Â With so very few games with actual strong female leads, IÂ heartilyÂ recommend this version of Tomb Raider as an example of what games can be without the need for overly macho tropes.

Cons: The camera lens reacting to the environment is my only concern really, though I would have liked more of the stealth parts in the game.