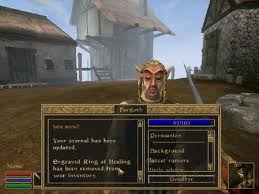 This is actually more of a mini-review or non-review because I didn’t finish Morrowind and I really only played for about 3 hours.

It’s really unfortunate that I didn’t get to play this game back in 2002, because I probably would have found it pretty good for its time.Â  Unfortunately this is not its time and it hasn’t aged well at all, IMO.

Having already played a few hours of The Elder Scrolls 4 Oblivion, I found myself unfairly comparing the two games.Â  I know from the internet that a lot of people were actually let down by Oblivion because it didn’t feel like there were thousands of hours of content.

In my opinion, Morrowind’sÂ  visuals were just not that great, the menu system was difficult to use, the RPG elements were deep but probably too deep for me.Â  The main problem IÂ  had was that I just didn’t get into the story, it seemed boring from the start.Â  Maybe this is more about how games have changed to be more cinematic, get you interested up front and you can afford a little waxing and waning in the middle section.Â  Basically your character lands in the first town which is only there to set up your character and then you are told to go somewhere else.Â  Once you get there your main quest guy might have just said “go explore for a while”, that’s the impression I got anyway.Â  This is probably exactly what defenders of the game liked so much, it was very sandboxey in its lack of a driving force.

Why did I want to join the guilds?

Why did I want to kill rats for this guild?

Why did I want to pick flowers for this other guild?

I had no answers to these questions, so when it came down to the main question of “Do I want to start this game up?” the answer was too often “No”.

Hopefully I have better luck with Oblivion, but it certainly isn’t boding well for Skyrim at this point.