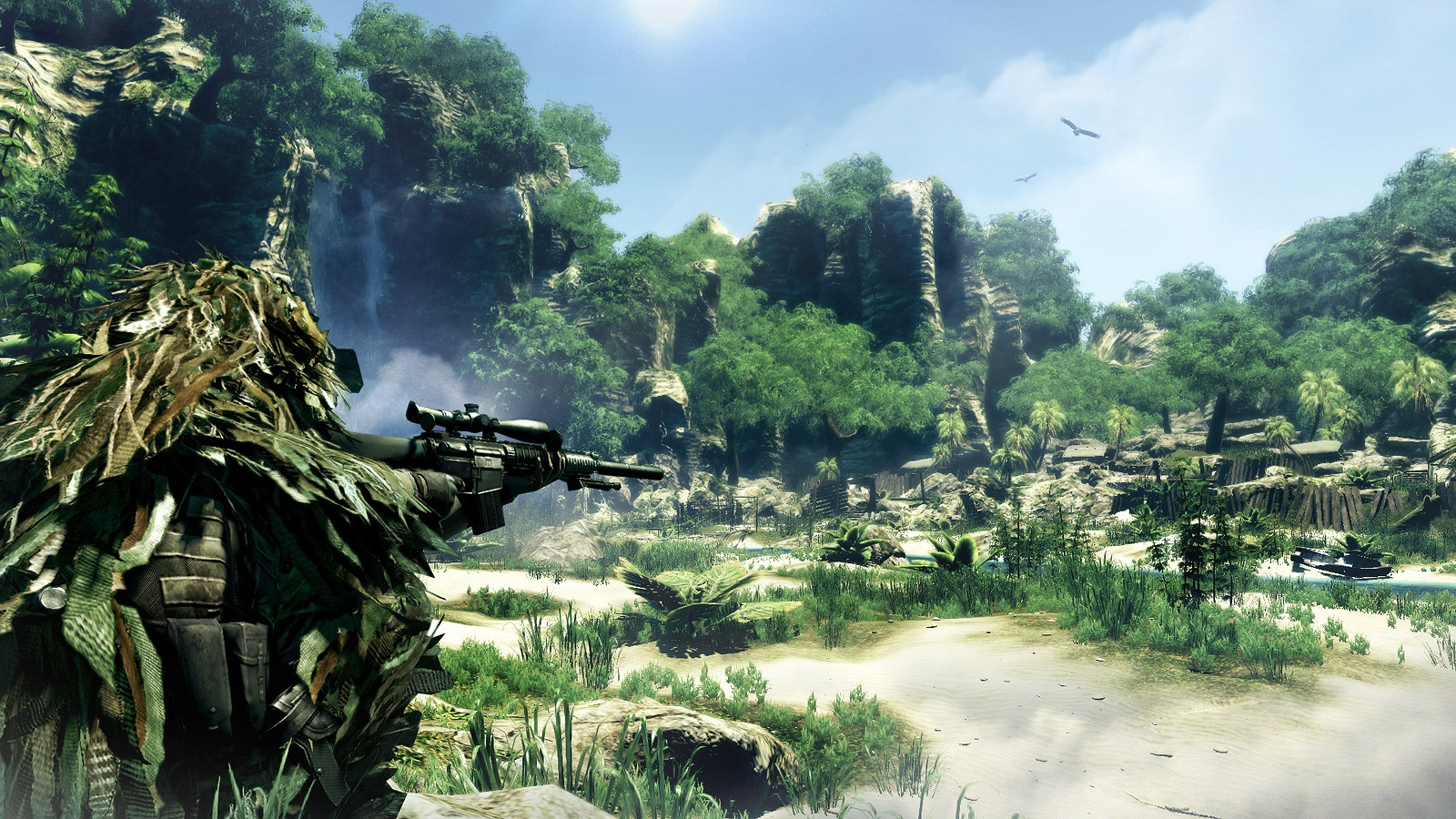 I have always loved being a sniper in games that allow it.Â  Always so distant and stealthy, just take your time and eliminate the target when they least expect it.

Surprisingly this game, like real life, shows that snipers do a lot more than that.Â  Especially considering high value targets are usually hunkered down in a city or in the mountains you need to infiltrate the area first, which sometimes means killing a few guards along the way (silently of course).Â  This adds an amazing amount of drama, crawling around in the brush trying to avoid detection, taking out guys who you can’t avoid when there is no one around.

The game also looks gorgeous, it’s mostly set in some South or Central American country so it’s all lush greens and white sand beaches.Â  The attention to detail is really nice, and the physics are superb.Â  When you shoot someone the way they fall might not be perfectly normal (unless the head would stay intact and weighs about 80 lbs) but they rag doll in a fun way.

Interspersed within the sniping sections you sometimes swap into an elite commando unit which is usually on the same mission with the sniper.Â  I suppose this was added to either break up the stealthy sniper parts, or to appease the people who just like to run and gun.Â  I didn’t think those sections were necessary in this game, since they exist almost exclusively in just about every other shooter.Â  Oddly they have a collection mini-game where you find laptops and steal info, which unlocks “secrets” on the main menu, but you can’t see these secrets in game, and when I finished the game I went to look at them and they were just emails or whatnot from the laptops you stole.Â  The secrets were added flavor that you couldn’t see until you left the game, so they became meaningless at that point.

What sets Sniper: Ghost Warrior apart from normal shooters is the attention to detail for long distance ballistic realism.Â  On the hard difficulty setting you have to judge wind velocity and bullet drop over the distance to make your shots.Â  Bullets don’t fire in a straight line in real life or in this game, and you have to take that into account.Â  On the Easy and Normal difficulty settings they add a little circle with the projected place the bullet will hit, which at some extreme distances can be about 2 feet below where the cross hairs are aimed.

They handle the typical game help “person in your ear” in a simple, in character way.Â  You have a spotter who finds a nice high perch and watches the entire area to relay information about nearby bad guys and when run across a road or take out a target.Â  This sort of things exists in real life, and it’s a better way then just having some omnipotent person at Langley who can see everything around you with some fancy Keyhole satellite with infra-red or something.Â  Your spotter sometimes has a limit to his view, or has to reposition and he can’t see what you will run into inside houses.Â  Later in the story you actually get to be the spotter while your spotter is off doing the sniping.

The game is not without it’s faults though.Â  My main problem was with the level design that made areas that looked like I should be able to go over a rock, under a fence, or between two posts but instead I hit the invisible wall.Â  I wouldn’t have noticed so much if they made it more obvious that I couldn’t go somewhere, but when there is several feet of clearance I expect that I can navigate through it.Â  A secondary concern is that if you are making a game that, as best as any game to date, simulates being a sniper than there are some things that might help sell the whole stealth mechanic.Â  First let the player drag people he’s shot out of the open if he wants to.Â  Second let him cut a fence when it’s easier than shooting 5 guys just so he can walk down the road; I saw Tom Berenger do it in the movie Sniper so I know snipers do it.

All together the entire campaign says I took 8 hours to finish it, and it was a decent experience.Â  I can’t speak to the multi-player, as I never play them, but I think it was worth whatever small amount I paid during a Steam deal.