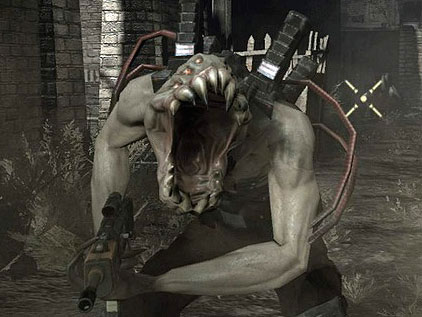 Resistance 2 sat on my tv stand almost as long as Batman Arkham Asylum did, for all the same reasons (plus a two week period where I was playing Batman instead).Â  After this game I realized there is little benefit for me to have two games rented at the same time, and I have enough to do outside of gaming that I don’t need the fast return option from GameAccess.ca so I cancelled those and it seemed to take forever for the next game to come in, but anyway.

I really liked the first Resistance on PS3, something about the story compelled me to finish it, I wish I could say the same for Resistance 2.

The game is, once again, set in an alternative history where some alien DNA is unearthed, in Russia in the 1930s, which spawns a horde of formidable aliens which kill most humans very quickly.Â  The protagonist is especially immune to the aliens and benefits from a similar regeneration ability afforded by some crossing of DNA with the aliens.Â  In the first game your character was one of a kind, special, and uniquely skilled to take down the evil oppressors.Â  In the sequel they messed with it a bit by making it seem like there are quite a few others and the army made special tactical units out of these groups of special people.Â  You also quickly lose that feeling you are playing in the early 1940s because your weapons are futuristic (even for today’s standards) and the environments are either bombed out cities, fairly deserted woods, or alien ships which look sadly like almost any other shooter.

Overall the game is passable, the video was fine, the sound was fine, everything was mearly fine.Â  In fact the story wasn’t uncompelling, I only stopped playing because the disk GameAccess sent me would not load up the Chicago level (roughly 75% through the game) regardless of how I tried to clean it.Â  I sent it back after the 4th or 5th time having to watch the preloading cut scene only to have the system lock up trying to load.Â  I probably would have finished it otherwise.

I think what I like about games is what they do differently from other games (including their own predecessors), so that a game that is basically just more of the previous game doesn’t really interest me very much, regardless of how much I liked it.