Remember Me is a third-person Action-Adventure game developed by Dontnod Entertainment. Â I rented it for the PS3 from GameAccess.ca.

In Remember Me, you play as Nilin, a female memory hunter in a future Paris destroyed by terrorists and weather phenomenon and in the middle of being rebuilt with the help of a large corporation called Memorize that invented devices that can hook into a persons memory and import and export individual memories like a hard drive known as Sensens. Â The memory hunters are essentially rogues that hunt down and steal valuable memories, though the game never explains why, but they are determined to bring down Memorize, the control they appear to have over people, and reduce the enormous class divide between the elite who have Sensens and the people who are either denied them, or have negative reactions to them which turn them into Leapers.

As the game begins, Nilin is having her memory erased and being prepared for some kind of treatment at a facility. Â This causes her to become very disoriented and have trouble walking, which is a great way to implement a simple tutorial level. Â As the character progresses down hallways she is contacted by the leader of the memory hunters who plans an escape for her, which eventually leads to one of Paris’ biggest slums and the introduction of one of the main antagonist types, the Leapers. Â This prologue helps to explain a bit of the backstory, the setting and familiarize the player with the controls and combat.

[youtube]http://www.youtube.com/watch?v=0r-nzz3yhK4[/youtube]Nilin gains some insight into her former self as the game progresses, and eventually gets some of her memories back which gives her a dark vision of the type of person she used to be. Â She learns over time that she can overload other people’s Sensens, steal memories, and even remix memories to make people remember an event differently than it actually happened. Â This is one of the coolest features of the game.

When Nilin begins to remix a memory, it first plays through the way it really happened as a cut scene. Â Then you can scrub backwards through the memory looking for glitches that you can manipulate to change the outcome. Â Sometimes the glitches are meaningless, and sometimes they have a completely adverse effect, but you can scrub backwards to undo your change. Â Some changes actually lead to other glitches to manipulate. Â It’s a really interesting system, and it would have been great to see a little more of it. Â It happens four times, which is probably on par for a game of this length, but I hope it gets enough traction to garner a sequel which can focus more episodes on remixing.

One of the things I’m never really comfortable with in games is gratuitous shooting, I feel as if it dehumanizes the protagonist. Â In the Uncharted games, Nathan Drake essentially murders hundreds of people. Â You can say “but those are bad guys, henchmen”, but the fact is he kills them when it’s not always a life or death choice. Â If I could have sneaked around I absolutely would have. Â If I could have knocked them unconscious, I probably would have. Â For this I’m glad Remember Me’s combat is all melee and ends with everyone being knocked out. Â It seems more in line with the character who doesn’t know exactly who to trust and feels guilt for the person she caused to commit suicide. Â It wouldn’t make sense for her to express guilt half-way through the game over making a man shoot himself if she had been wantonly killing guards up until that point. Â Melee combat also allows for a semi-complex combo system, which allows the player to configure for whatever benefit you want to have. Â The player performs the combo the same; square, square, square; or triangle, square, square, triangle, square square; but the player can make the combo do lots of damage, or instead heal Nilin, or reduce the cooldowns of her special abilities. Â It’s a very interesting system and I’d like to see more of it in a later game.

The thing I like most about Remember Me is the way they portrayed the female protagonist. Â I’m not a huge feminist, I feel everyone should be treated equally and most of the feminist talk I see tends to lean towards women being treated “more fairly than men”. Â That said, I really appreciate a game that doesn’t fall back onto tired tropes of making the female lead wear unnecessarily skimpy clothing, and doesn’t have the henchmen calling her a bitch. Â I’m sure someone more skilled with video game tropes likeÂ Anita Sarkeesian would be able to find something demeaning in the narrative, but I feel overall it’s a good step towards making a realistic heroine character. Â Jean-MaxÂ Moris has stated in a different interview that one of the challenges with designing Nilin was creating a protagonist that was not over-sexualised or ineffective, saying: “You have to avoid the pitfalls of making her just a damsel in distress or a sex bomb, because this is what you think would appeal most to the hordes of men that constitute your fan base”. Â The game could have been made with a male protagonist without changing much of the story or dialog, but they chose not to do that even when they were apparently asked by their publishers. Â This speaks to the fortitude of the developers. Â They had a vision and wouldn’t allow themselves to be bullied into changing it. Â I don’t think every game deserves a female protagonist, or even a choice like Mass Effect, but give me some variety in character type. 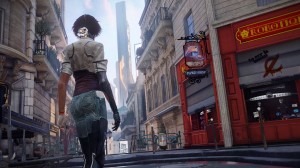 The visuals were very nice, great settings and really neat use of the Augmented Reality overlays on buildings and signage. Â The voice acting was pretty good for the most part. Â There were only a few bugs where I couldn’t progress without restarting from the previous save point, but those were pretty close to where the bug occured so it didn’t affect me negatively. Â I know Yahtzee complained that the twist in the story wasn’t as good as the one he figured it would be while playing the game, but for me that fact that I didn’t see the particular twist coming was a great surprise, and I actually liked it.