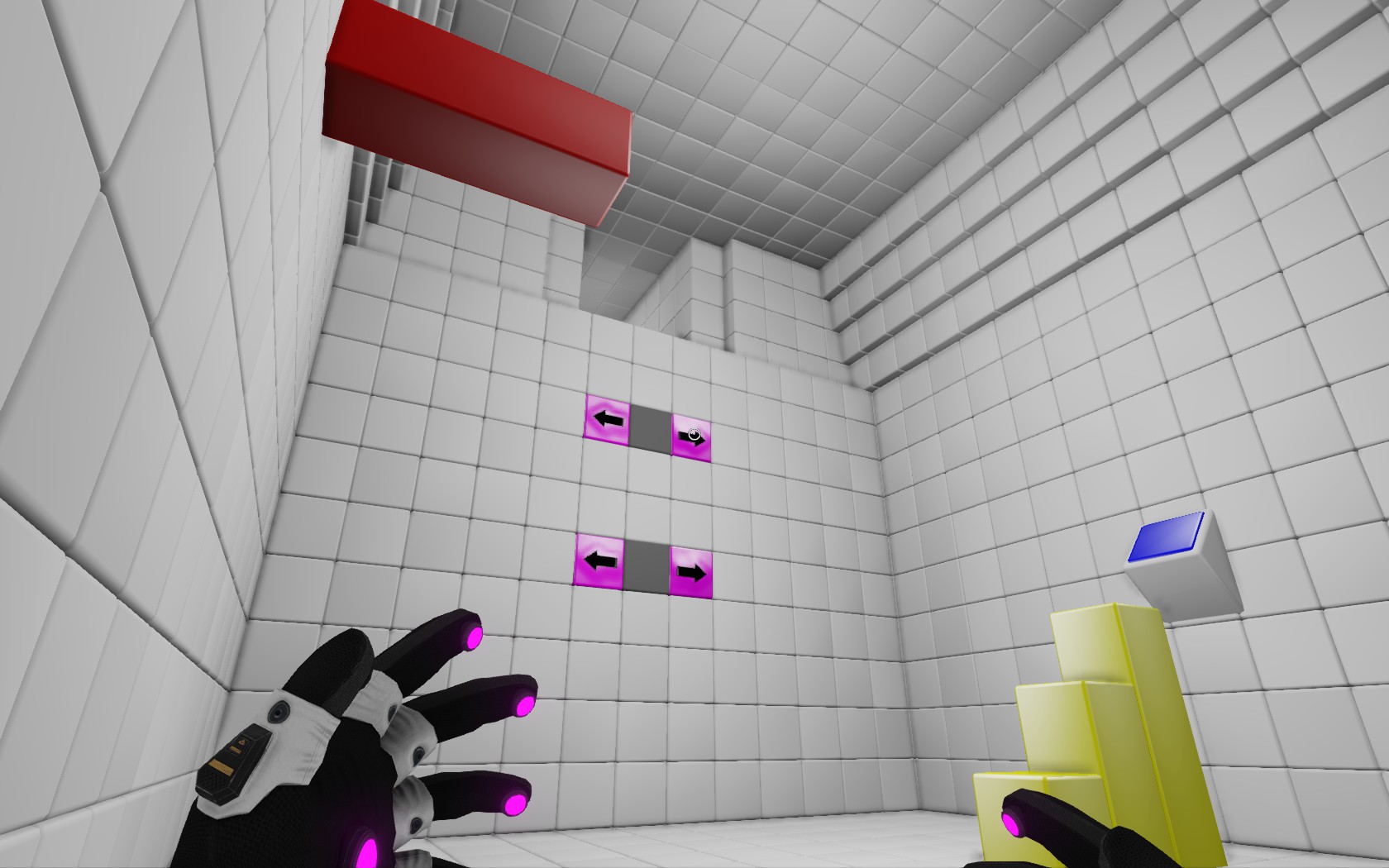 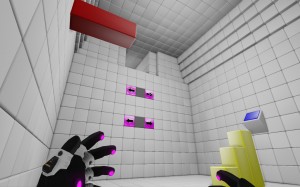 I picked up Q.U.B.E. in the Steam Cube Pack along with Blocks That Matter and EDGE (so this is really turning out to be a great pack) and has probably been compared to Portal about a hundred times, so I’ll try not to do that here (other than I just did).

Q.U.B.E. is a first person puzzle game where your character can manipulate some of the blocks that make up the environment. Â In effect this game is a physics based puzzle platformer, which it does really well for the most part. Â Red blocks can be extruded straight out of the wall, yellow blocks extrude three blocks as steps, blue block create a sort of jump pad, and other colour blocks do things that are a bit harder to describe at first. Â The levels are set up very well, and progress you through each skill before bombarding you with others, by the end you have been given the ability to place different colours on specific blocks and manipulate the environment in whatever way helps you solve the puzzle. Â Some of these puzzles are difficult to figure out, and some are just frustrating because you have to manipulate a physics puzzle with a free floating block that sometimes rotates in way that messes up what you are trying to accomplish (often times due to unnecessary friction). Â That is one place where the game seems to lack a little polish, there was one puzzle where I unfortunately managed to get the floating block out of line with the solution and there wasn’t a reset option on that stage so I had to quit to menu to fix it.

All that said, when I started this game I had only planned to see if it was worth playing more or deleting directly and ended up playing right through. Â It isn’t a long game, I finished the whole thing in under 4 hours and would have done it in one sitting if I didn’t have to go out halfway through. Â The puzzles mostly fun to figure out, and for the most part once you figure it out you can complete it with little frustration. Â The environments, sound, art, and models are all fantastic and very reminiscent of a great little 4 hour game that Valve produced a few years ago.

The main complaints I have are that there is absolutely no story or narrative, which would have put this game over the top. Â It seems to want one, you are going through these (for lack of a better term) test chambers and then things start to break and you end up behind the scenes of this elaborate machine but there is never an explanation of why. Â I think they maybe intended to have some kind of narrative but were afraid it would come off too much like that other game that starts with a P. Â There are also zero instructions as to what to do, which is actually fine because it leads you to explore, and there was never a side effect of just trying stuff out. Â There doesn’t seem to be any place in the game where you can die or get stuck in a hole you can’t climb out of to which the level designer deserves Kudos. Â But in a few places I was standing around thinking “what do I do” until I just started clicking on things to see if something would react, and eventually something did. Â I’m actually quite impressed that this game was made by about a dozen people. Â I think they had about 7 times that many people listed under “testing” which explains how it’s mostly completely polished gameplay-wise.

The ending credit sequence was decent, and the music was all right but unfortunately it just didn’t measure to that game that rhymes with mortal. Â I think the real tragedy is that it’s forever going to be dubbed a Portal-like until we start having a real term for this type of First Person Physics-based Puzzle Platformer (FPPPP) which is becoming more and more an actual genre. Â I think it took many years for FPS games to stop being called Doom-clones.

While it was fun to play and tested my brain, I don’t feel like I’d want to play it again the way I did with Portal and I can’t really explain why.

Cons: No plot, story, or narration; Some of the physics puzzles were too easy to break and became frustrating