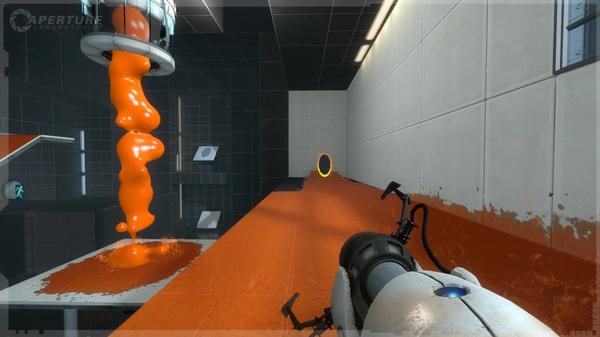 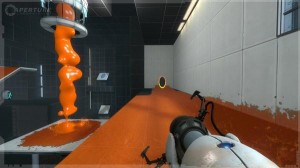 Considering how much I loved Portal, I was surprised that I didn’t pick up Portal 2 as soon as it became available.Â  There just seemed to be so many games I still hadn’t gotten around to (I’m still at about 60, not counting games I don’t own yet), but Steam made me an offer I didn’t feel like refusing.Â  Portal 2 went to 50% off a few weeks ago, so I snatched it up quick and got right into the game.Â  It’s not as short as the first Portal (3 hours) but it’s not especially long (8 hours), which if you follow my posts you know is actually a good thing to me.

Firstly the puzzles are great, some are very challenging and I’m glad to say I didn’tÂ  have to look up the answer to any of them which made me feel very smart when I finally figured them out.Â  Adding more portal puzzles would have been good, but adding in the different gels later in the game was fantastic.

I like the way the story sort of ties in the events of the first game, but it’s still vague enough that it’s not exactly clear what is going on.Â  What was really unexpected and interesting was the Cave Johnson and Caroline arc that happens in the second and third act, I really enjoyed it and want to know more about Cave.Â  I hope there is some kind of follow up game that explains this world a bit more, though I don’t see how that would work.

The voice acting is phenomenal!Â  I’m typically a fan of Stephen Merchant anyway, but he’s the perfect voice for this roll.Â  Top notch work all around.

I haven’t played any of the coop levels yet, I need to find someone who hasn’t done them, because I don’t want someone “telling” me what to do, I want it to be a discovery process.

I wish I had more to say, but it’s just a great game that I wanted to play more of as soon as it finished.Â  I left it installed on my system in case I get a teammate for coop and possibly to run through it again for the hidden ratman stuff I missed and other interesting tidbits.

One gripe, you can’t just load up a level to play again which would have made doing achievements easier… maybe that is why they didn’t have that option.Â  But I missed an achievement around the 7 hour mark, I’d have to play the entire game to attempt it again.