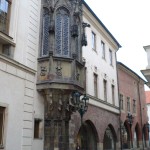 A gothic addition to this building 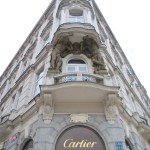 Carvings on the Cartier building

One of the things I love about living and working in Prague, especially the older parts of the city, is the architecture. The city was obviously built up during a specific time when it was easy to make 4 or 5 story walk-ups. Most buildings in the core are this height, not a lot shorter and basically none higher. Then it seems there wasn’t a lot of changes for long enough that by the time new shiny high-rise construction came on theÂ scene all thoseÂ buildingsÂ were considered “historical” andÂ got to stay the way they were. 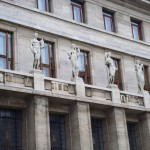 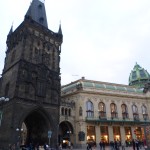 Municipal House Hall with a gothic tower next to it.

Some were upgraded with elevators, newerÂ windows, good heating systems, and the like. Most were probably renovated a few times over the centuries, but they were allowed to keep their charm through all of it. There even seems to be a market for new things that look old, to fit in better.

In addition to the basic building block of buildings in a row with different colours so they look as if they were built one beside the other, rather than all at once as you would see in a Toronto row house, the buildingsÂ have extravagant embellishments. Many of the buildingsÂ have crown mouldings

A statue on the side of an otherwise normal looking building 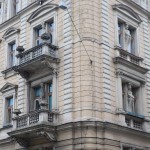 Statues at each balcony door

and elaborate statues and reliefs carved into them. At first I thought it was just the “important” buildings, like palaces, state buildings, museums, galleries, etc. But as I walked around Mala Strana the other day after work I realized that these are just office buildings. Sadly some of them have fallen into disuse I believe as a few buildings in that area have graffiti along the base and a lot are still under renovation constantly but the charm is mostly still there, and with a fresh coat of paint and some newÂ plaster these buildings could be in theirÂ former glory in no time.

A lot of this, I’m told, is due to the fact that for centuries there were warring factions on all sides, Polish, German, Austrian, Hungarian, French, Ukrainian, and Romanian were always wanting to travel though this area, so the Bohemians made hundreds of castles to protect their borders. And unlike a lot of European cities that were bombed during the world wars, Czechoslovakia missed a lot of that. That means all these old buildings still exist, and didn’t need to be rebuilt. 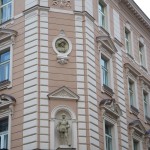 Another statue on a regular building just near my office

This style is the same to me as the choice to keep the roads as cobblestones. They aren’t the best for walking on, or I assume driving on, but they can give and take with weather shifts much better than concrete or asphalt. In the end what makes it great is the old world charm it adds to any street. As such there are no or at least not many new glass and metal buildings in the downtown core, which makes them tourist destinations, which gives a good reason to keep them that way.

There are a few communist era buildings around, which are all very functional and boxy, these stand out sorely next to almost any building, and to the credit of the Czech people they are mostly demolishing them where they can. It’s a smart move that makes Prague such a popular destination for all Europeans as well as international visitors. I have seen from higher viewpoints that there are definitely high-rise areas outside of the core, you still have to go way out to get there.