A few days after I arrived in Prague my friend Guy asked me if I had any plans to see an opera or classical music while I was here. To be honest the thought hadn’t crossed my mind. I had never thought of myself as an opera guy, and while I like classical music at times it was never anything I thought about seeing live. Perhaps in my old age I’ve learned to appreciate these things because after he mentioned it I starting looking up local performances. To my wonder and awe I found out that not only are there several operas, ballets, and plays performed all the time but they are being performed at buildings that were around when these plays were written. To add to the surprise the tickets for these shows were extremely inexpensive in comparison to Toronto. 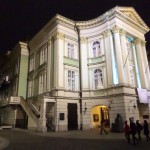 After going over my options I decided that it was best to see Don Giovanni by Wolfgang Amadeus Mozart, playing at the Estates Theatre. The last show in February was on the 13th and then it was not going to be performed again until mid-March. I was able to get a ticket on the 2nd balcony level in a box right in the middle for 450 CZK ($24 CAD) which is a steal, as anyone who has ever been to an opera in Toronto would know. In the photo to the right, my box is second balcony up, right in the middle, near where you can see a man standing against the railing. 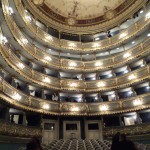 The view of the balcony from the orchestra level

The Estates Theatre was constructed in 1783 and has not been changed much since then. In 1786Â it was known as the Nostitz Theatre, and showed performances of Le Nozze di Figaro, the previous Mozart opera. These performances had such a great reception that theÂ members of Prague’s opera orchestra and the local society of connoisseurs and opera enthusiasts sent an invitation letter to Mozart in Austria with an attached encomiastic poem in German. This caused such delight in Mozart that he travelled for days to reach Prague in the winter of 1787. Once in PragueÂ he conductedÂ a performanceÂ of Le Nozze di Figaro personally and was commissioned to create a new opera, which became Don Giovanni.

A large portion of the opera was composed in Prague and the rest in Austria. When Mozart returned to Prague in October of 1787, he conducted rehearsals at the Estates Theatre (then Nostitz Theatre). The world premiere performance of Mozart’s Don Giovanni was October 29th, 1787 at the Estates Theatre in Prague, with Mozart conducting on the harpsichord. The opera had such tremendous reception that it became a huge hit and became what it is today. 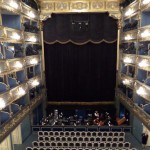 The view from my box seat

Knowing all this, the ability to sit in this theatre and watch this opera had an even greater impact. The theatre doesn’t have much in the way of new appointments and as such it looks and feels probably very similarly to how it did in 1787. With so many people dressing up in fancy dresses and tuxedos, you really feel like you are living in history by attending. 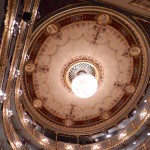 The ceiling of the Estates Theatre

The opera itself was fantastic. I was blown away by the naughty subject matter and stellar performances. Performed in the original Italian, with a special screen well above the stage with included Czech and English translations so I was able to hear how it should sound while still understanding what was said. The orchestra was pitch perfect and gave a warmth to the music I didn’t expect to hear. This experience has completely changed my interest in higher entertainment. It is definitely something that is accessible to someone like me with little to no formal understanding of operas or musical composition. I will recommend it to anyone as it will broaden your horizons and open your mind.

I made it down to the theatre a few hours early, so I wandered around the nearby Old Town Square. While not directly related to the theatre story they are some great photos, so I decided to add them as well. 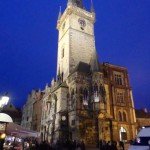 Robot busker in front of Church of Our Lady before TÃ½n 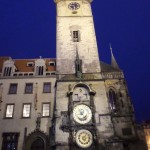 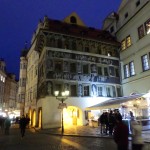 Cool paintings on side of building 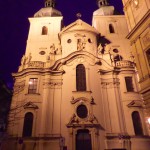 The Church of St. Havel