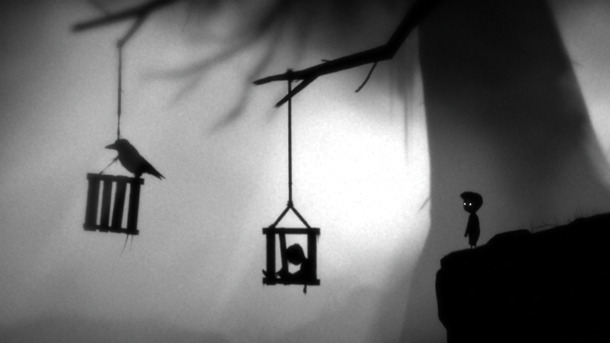 [youtube]http://www.youtube.com/watch?v=Y4HSyVXKYz8[/youtube]I played Limbo for about 3 hours one night when I decided to try it out. Â Eventually I got too tired to keep my eyes open and quit, and I didn’t play it for several weeksÂ afterwards. Â I finally ran it again today and it turns out I stopped about 10 minutes and 2 puzzles from the end, hehe.

At first I thought Limbo was just a style piece with no real gameplay, something you show to people to justify games as an art form or something. Â The whole game is in aÂ silhouetteÂ with muted grey backgrounds and plays as a 2.5D side-scrolling platformer. Â The visuals are interesting, because it’s all in shadow you have to guess at some things, which is fine as an artistic choice. Â Visuals aside the game is still dark in it’s mood.

You play as a boy who wakes up in the forest and is compelled to walk to the right (as Mario always used to be) and traverse certain obstacles that get in your way. Â There are many opportunities to die in this game and many of them are quite grim. Â Often the little boy will be skewered on a pike or cut in half by a giant circular saw each time with satisfyingly grotesque squishy sound effects.

The game does not penalize you for trying and dying, you almost always start just a stones throw away from where you died, so the game is mostly about figuring out how to get past the puzzle in front of you. Â This includes many types of “gizmos” such as switches that change the direction of gravity, giant electro-magnets, and electrified rails, among many others.

I won’t say too much about it, because it’s an interesting experience and for only $10 or so on Steam it’s worth spending three hours beating it. Â It’s actually remarkable how it conveys feelings without a single word. Â Go play it.