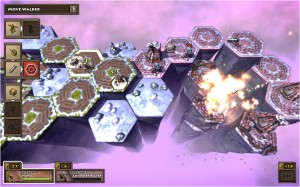 Greed Corp is a turn-based tactical strategy game developed by W! Games (looks like it’s been bought out by Vanguard Games) where the objective is to outlast the other opponents by harvesting land, attacking and strategically destroying connected land. Â The players start at strategically equal points on the map and take turns building harvesters and expanding control of the lands. Â The land itself is made up of hexagonal tiles of varying height which represent how many times they can be harvested. Â Every turn your harvesters will give resources but at the same time lower the tile. Â When the tile gets too low it will crumble and that land is lost. Â This technique can be strategically used to destroy your opponent or block access to your tiles.

This is not the kind of game I typically play, but for some reason it was oddly addictive. Â I played for a full 8 hours in one day, which completed one of the 3 single player campaigns. Â There is a multiplayer component, which I did not attempt. Â I think it was the strategic destruction of the playing field that ensured each game would not take more than about 20 minutes. Â The only thing I realize now that really grated on me was the music, which is basically the same tune over and over again. Â Not sure why I didn’t just turn it off.

Cons: No depth to the game, annoying music that gets stuck in your head