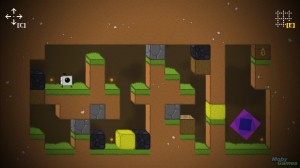 I decided to buy an indie bundle (shocker, I know) from Steam called the Cube Pack, which included a bunch of cube themed games (BIT.TRIP Runner, EDGE, Critical Mass, Q.U.B.E., RUSH, and Blocks That Matter – You know they are serious because of all the capitals), for about $10. Â This bundle is totally worth it if only for Blocks That Matter, it is a great 2D platform puzzler with all kinds of nostalgia for the games I love.

The basic idea is that Â you control a robot that has the ability to remove blocks from the environment that you can get underneath or beside, and you can place them back into the world in other places. Â The catch is you can only place 4 blocks as a minimum and they must all connect, which means they always look like Tetris pieces. Â Some blocks have different properties, such as if they don’t Â have another block underneath them they will fall. Â It’s a fairly basic concept but the execution is perfect. Â Truly fun puzzles that often challenged me to do things that I didn’t even think of at first. Â I finished it in 3 sittings of 3 hours each and then another 2 hours playing the bonus content.

Another great feature that came with the game is the level editor, you can create your own levels and upload them for everyone else to play and rank. Â I tried out a few other people’s levels and they are mostly very difficult. Â But the fact that is included makes this game nearly everlasting.

The game by itself is currently $5 on Steam, and it’s completely worth every dollar.