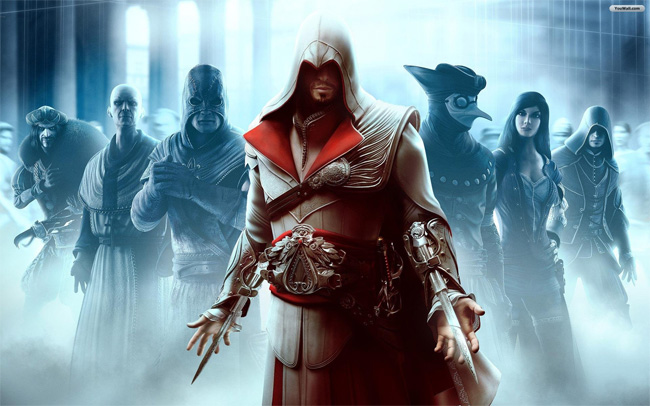 Assassin’s Creed: Brotherhood is basically Assassin’s Creed 2 part 2 and continues the story of Ezio Auditore, the 15th century ancestor of the protagonist, Miles.Â  I expected big things from this game and even bought the collectors edition for the jack in the box and the making of DVD.Â  It didn’t disappoint.

In some respects the game is just more of the same, but AC2 was very good and more of that is not a criticism at all.Â  That said there are plenty of improvements over the previous game, such as faster weapons, better controls and more interesting missions.

The game takes place almost completely in Venice, Italy and there are some vistas in the game that are absolutely breath-taking.Â  You can see almost the entire city from certain vantage points and the draw distance is amazing.Â  What is really amazing is that a lot of Italy hasn’t changed much since the 1500s and you could probably walk some of the same streets looking almost in the same condition now.

One thing that seems to be a big problem with Assassin’s Creed games especially on the PS3 (I don’t know if this happens on any other system) is screen tearing.Â  This is extremely prevalent, and it happens in other games like Uncharted so I’m not exactly sure why this sort of thing can’t be optimized for what I assume is a closed system like the PS3.Â  To be fair I’m using a first generation PS3 (or maybe 3rd or 4th, it only has 2 USB slots, but it’s not a slim) so it’s possible that the game runs much better on the newer machines.

I’ve heard a lot of criticism regarding the brotherhood side-quests where you mostly tell other assassins to go kill people in interesting places but don’t do it yourself.Â  This really played into my RPG side as instead of just getting to upgrade my main character, I got to upgrade 10 others as well.Â  That said, after they were all max level, I lost a lot of interesting in having them do missions.

If there was one thing they could have fixed, I think locking off certain actions until you progressed a certain way in the story would make more sense.Â  I walked into Venice and saw a tunnel entrance for sale, so I bought it, but it was completely useless until I worked through enough quests to introduce the hideout.Â  Similarly I found a lot of “junk” drops that I didn’t know what to do with them and sold a lot of them off before I realized there are shop quests which require some of them (there really should have been more of these) and I constantly thought that one thing I was always missing was something I sold off early on.

I still haven’t gotten into the multi-player because I mainly like to play against my friends, and it seems none of my friends play on PSN.

I hope Assassin’s Creed 3 will be as much fun as the other three games have been.