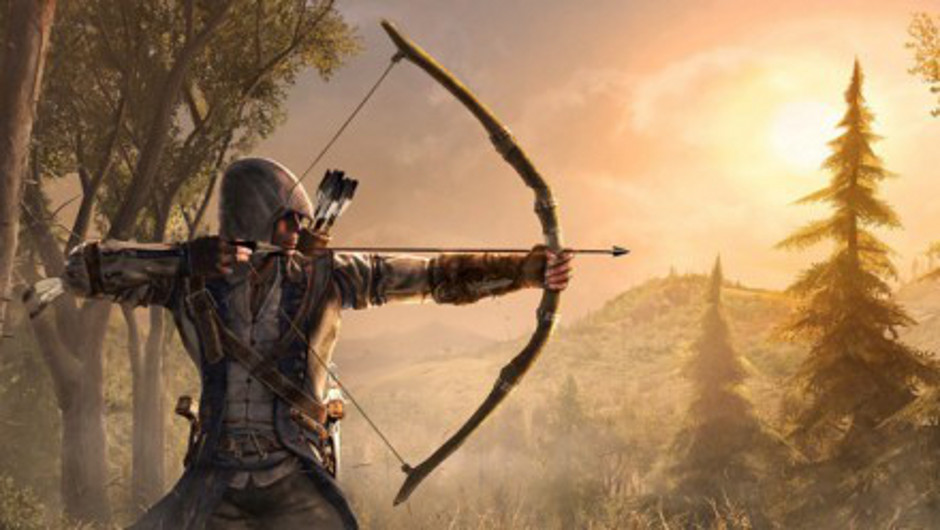 Assassin’s Creed 3 is a third person action adventure platforming assassination/history game from Ubisoft Montreal. Â I had pre-ordered the game for PS3 from EB Games when they first offered it, but something about the game information that was being leaked, my opinions of EB Games, and my growing dislike of “owning” physical media for an outdated system made me cancel it. Â That said I recently renewed my Game Access subscription specifically to rent these kinds of games that I find myself playing once and then never again. Â I had wanted to wait for Assassin’s Creed 3 to release on PC, but for some reason that always takes Ubisoft about a month to port. Â It’s a shame since that is usually how long it takes them to fix the glaring bugs and the PC version of games is much better now then in years past.

This time Desmond relives the adventures of Haytham and his son Connor during the American war of Independence. Â The purpose is to find a key that was hidden away 200 years ago and is needed to open a magic door found underneath New York. Â Connor is a half English, half Mohawk running around late 18th century Boston and New York but it features only slightly in the story. Â You still have the remarkable ability to blend in, while wearing native attire and brandishing all manner of weapons, with fancy suit wearing folk. Â This time around there is a lot more running around as Desmond, which was great. Â There is a scene at the top of a skyscraper in Manhattan that looks amazing, I wish more of the game was like this.

This series of games is deemed as stealth, but after playing through Dishonored I felt Assassin’s Creed 3 has about as much stealth as a Halo 4. Â There were areas in Dishonored that I completely cleared out without anyone seeing me, but in AC3 I could sneak up on about 2 or 3 people before someone would eventually see me and I’d end up just in a 1 on 20 fight until I was surrounded with corpses and they had no one left to throw at me. Â So many times I was drawing comparisons where I wanted to Blink in behind someone and take them out but instead I had to jump on them and stab them which was seen by someone across the forest.

The new engine they created for this game has a lot of great additions, it is now easier to free run and a lot less likely to jump wildly off of buildings accidentally. Â Connor can parkour over low objects like tables and small fences, and slide under small openings which really helps you to keep momentum while escaping. Â Environmental effects like snow, rain, fog,Â etc.Â  have been added which was a great change of pace. Â New kill animations and the running kills which can be done against two other characters were really interesting. Â The blend system has been greatly improved with you now able to blend between any two people, even if they are moving, they don’t have to be a set group. Â There is also a naval battle system that was interesting if somewhat out of place, I assume this is what replaced the terrible tower defence game from Assassin’s Creed: Revelations. Â Also added are a skinning system to reward you for killing forest animals, and a crafting system which creates items that you can send to the general store to make money. Â This is what, sadly, replaced the purchasing of shops in the previous games and it was a huge mistake.

Unfortunately the new engine also brought along a lot of problems. Â Firstly the amazing new free running system which lets you deftly navigate strategically planted trees all over the forests of greater New York required Inverse Kinematics (IK) for feet placement and while IK works really well in the trees it also caused a ton of glitches with everything else. Â It became commonplace for me to pick up a corpse which suddenly had it’s leg broken the wrong way, and so often that a body would fall and then do the crazy IK dance on the ground as it tried to figure out the proper position for the feet of a corpse. Â What surprised me the most was the places where I found no texture on a piece of geometry. Â I expect that in a large game there are going to be some places where the texture isn’t mapped correctly (this leads to the texture being pulled across the pane and usually just looks cheap) but there were large areas in the underground tunnels where the lack of texture just created a hall of mirrors. Â You would think with the hundreds of QA in the credits someone would have gone down that tunnel path. Â There were also a lot of places where I would get stuck and have to fast travel to get away, and places where the guard I was trying to sneak up on would be walking in place but always looking in my direction regardless of how I sneaked around. Â Of course I finished the game just as patch 1.03 was coming out, so it’s possible all those problems were eventually fixed, but why bother releasing a terrible version early when it was completely acceptable to wait on releasing the PC version?

I feel I did learn something about the war of Independence, but mostly that it was a fairly uneventful war and that George Washington was kind of a dick to people, was a terrible general, and owned over 200 slaves which were only freed after he and his wife died and didn’t need them any more. Â He also ordered hundreds of Native camps burned to the ground with the inhabitants and paid for Native scalps all because he heard they weren’t too happy with him and might be joining the French to fight back (good plan to stop that from happening, Georgie). Â I also learned that Connor was the Forest Gump of his time, being lucky enough to know every single important historical figure and be present for every minutely significant event of the times, yet never being mentioned himself. Â Yahtzee had a good idea that it would have been much better if it were the French Revolution or the American Civil War, unfortunately they didn’t and with the way the game ended I am fairly certain I won’t even bother with another sequel now.

Pros: New parkour and free running, ship battles, the ability to kill and skin hundreds of bunnies and beavers, and an end to this story (hopefully)